In the Young Irish Disorders of 1848 the following nine men were captured tried and convicted of treason against Her Majesty, The Queen, and were sentenced to death; John Mitchell, Morris Lyene, Patrick Donahue, Thomas McGee, Charles Duffy, Thomas Meagher, Richard O’Gorman, Terrance McManus and Michael Ireland. 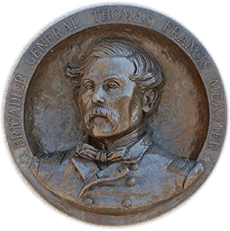 Before passing sentence the judge asked if there was anything anyone wished to say. Meagher, speaking for all, said; “My lord, this is our first offense but not our last. If you will be easy with us this once we promise on our word as gentlemen to try and do better next time. And next time – we won’t be fools to get caught!” Thereupon the indignant judge sentenced them to all be hanged by the neck until dead, then drawn and quartered. Passionate protest from all the world forced Queen Victoria to commute the sentence to transportation for life to far wild Australia.

On the Queens demand the records of the rest of the transported men were revealed. This is what they uncovered:

Anything can be accomplished with the right attitude.